Finally, 12 Igboho’s Aides Set To Be Released From DSS Custody 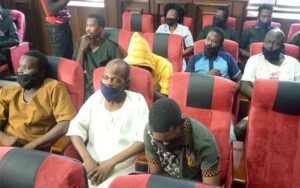 Pelumi Olajenbesi, the lawyer to the 12 detained aides of Sunday Igboho, has said his clients will soon be released from the Department of Service (DSS) custody.
Recall that the 12 aides have been in DSS custody for about 50 days for failing to perfect their bail and regain freedom.

One of the conditions for their bail was that the 12 aides should have 24 sureties after they were earlier asked to produce four sureties.

Speaking with the PUNCH on Friday, Olajengbesi said the requirement for 24 sureties had been met as required by the court.

He disclosed that the bail office of the Federal High Court in Abuja said it needed to write letters to the offices of the 24 sureties to get more confirmation.

He, however, appealed to the court to quickly confirm the authenticity of the sureties so the detained persons could regain freedom.

“We have the 24 sureties already as required by the court, but the challenge is the bail office insisted that it needs to write letters to all the offices of the sureties to confirm the sureties,” he said.

YOU MAY ALSO LIKE:   UK-based Actress, Juwon QUADRI to give marriage a second chance?

It would be recalled that the 12 aides were arrested by DSS operatives during a raid on Igboho’s Ibadan residence on July 1, 2021, and subsequently brought to Abuja.

The aides had approached the court through their lawyer to seek their release in line with their fundamental human rights.

The presiding judge, Justice Obiora Egwuatu, had on August 4, 2021, admitted the 12 applicants to bail.

YOU MAY ALSO LIKE:   Atiku’s Appeal: CUPP Fires Back At Supreme Court

However, their bail perfection suffered a setback last week as the Federal High Court in Abuja demanded 24 sureties, a development that was in contrast to four sureties earlier demanded by the court.