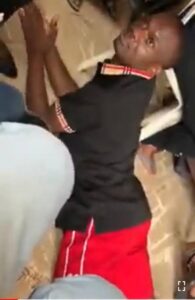 A Child molester known as Amandi Levinus has met his waterloo after an investigation has revealed that he repeatedly defiled about three minors in his compound in Lagos.

Information made available to this publication has it that this young man has been perpetrating this act for many years without been caught, and probably threatening his victims not to tell anyone about it.

The revelation wouldn’t have been gotten if not for the mother of one of his victims who went to her daughter’s school where a counselling programme was held for the students with the parents in attendance.

The counselling session was to educate the pupils about sex and when to voice out whenever anyone touches them in sensitive parts of their body. During the session, pupils were allowed to talk about their experience, which led to her daughter confessing to having been molested by a known face.

When speaking to this publication, the mother expressed shock at the revelation because she never thought something of such could happen to her daughter. She made it known that it was later discovered that her daughter was not the only victim.

Angered by this development, the culprit was questioned and arrested but claimed that he never penetrated with his manhood but makes use of his finger to perpetrate the evil act.

‘’It happened at home, it was not once, I don’t know what he threatened the children with because he didn’t do this with just my daughter, he does it with two other kids. it has been going on for couple of years and according to my daughter, the first incident happened in 2018 when they just moved here. The most recent one according to her happened in June/July 2020.

YOU MAY ALSO LIKE:   Mayor of Banjul, Rohey Lowe Launches REFELA in Gambia

We just discovered, she has not been feeling fine so I came home because I don’t live here, I had to come because she was sick, immediately I came I decided to go to her school. They invited counsellors to their school and they were able to talk to the kids, a lot of them confessed but I concentrated on my daughter, it’s really bad, I’m yet to recover from the whole thing.

YOU MAY ALSO LIKE:   BUA continues support for COVID-19 Interventions

We went to Idimu police station yesterday, they gave us a letter to go to Ikeja hospital to run a general test on her, He’s been claiming that he has not penetrated but from the test, He has tempered with her anus and Vagina, I’ve been crying, still in shock.

Previous Neymar On Target As Brazil Beat Paraguay Away From Home After 35years
Next Popular Singer, Wizkid Changes Stage Name