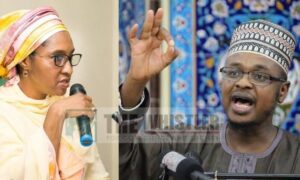 …Says Minister Cannot Claim Ignorance Of A Policy Approved By FEC
The Minister of Finance, Budget and National Planning, Mrs Zainab Ahmed on Thursday faulted the opposition of the Minister of Communications and Digital Economy, Isa Pantami on the five per cent increase on data calls.

Zainab made her position known in a statement released by her Media Adviser, Yunusa Abdullahi and made available to THE WHISTLER.

The federal government had announced plans to implement the new tariff hike of five percent on calls and data.

The government said it will begin the implementation of five percent excise duty tax on all voice calls, SMS and data services, in addition to the existing 7.5 per cent Value Added Tax paid for goods and services across all sectors of the economy.

But shortly after the announcement of the new tax rate was made, Pantami rejected the planned implementation, claiming he was never consulted during the conceptualization stage of the policy.

He had expressed his disapproval of the policy at a telecom forum in Lagos, organised by the Nigeria Office for Developing the Indigenous Telecoms Sector, an agency domiciled in the Nigeria Communications Commission.

Pantami had said that he would explore every legitimate means to stop the planned five percent excise duty tax on telecom consumers, faulting the timing and process of imposing the tax on the telecom industry.

He had insisted that part of the responsibility of a responsive government was not to increase the challenges that citizens were facing.

When implemented, the excise duty would rise to 12.5 per cent. Telecom operators had also said the burden will be pushed to the consumers.

Pantami had said, “The ministry of communications and digital economy is not satisfied with any effort to introduce excise duty on telecommunication services.

“A sector cannot be a consumer today; each sector must contribute a certain percentage to the economy. And if we fail to do that, we would be increasing the pressure and by doing that we would be destroying the digital economy sector.

“Excise duty is introduced to discourage the consumption of certain commodities like alcohol, and tobacco. But today, without broadband penetration, how can you perform financial transactions, how can you deliver lectures without that, how can you work in a hospital, these services are a necessity.”

But reacting to Pantami’s comments, Zainab said that the communication minister cannot claim ignorance of the plan to implement a five per cent increase on data call because the policy went through the Federal Executive Council which he is a member.

Aug 5, 2022
She said, “In view of the position of Prof. Pantami, there could be the question whether he was absented in the whole processes that resulted in the Finance Act, which is a product of both the National Assembly and Federal Executive Council.

YOU MAY ALSO LIKE:   Trouble For Adeleke As Oyetola, APC Submit 1,240-page Petition, Accuses Gov-elect Of Forgery

“Suffice this to say that before the Act, the Finance Bill would have been through the FEC of which Prof. Pantami is a member and the National Assembly. In other words, he was involved in the making of the Finance Act which spells the said excise tariff hike policy.

“Therefore, he could not obviously have had a point in his dissenting views even as the National Assembly could not have contradicted itself on this matter, because the parliament had passed the Finance Bill before President Muhammadu Buhari signed it into law.”

The Minister added that the five percent excise duty has been in the Finance Act 2020, but has never been implemented.

“Henceforth, the five percent excise duty will be collected by telecom operators and payment made to the federal government on a monthly basis, on or before 21st of every month,” she added.

She said apart from FEC, a circular was issued to all stakeholders, adding that the finance bill which is the instrument upon which the increment was based went through the National Assembly.

She said the circular with referenced no. F. 17417/VI/286 dated 1st March 2022, and titled “Approval for Implementation of the 2022 Fiscal Policy Measures and Tariff Amendments” was addressed to different Ministers, including Minister, Communications and Digital Economy and other heads of government agencies.

Others are Ministers of Health, Aviation, Information and Culture, Budget and National Planning.

Other heads of agencies copied in the circular are Accountant-General of the Federation, Comptroller-General of Customs, Governor of the Central Bank of Nigeria, Executive Chairman of the Federal Inland Revenue Service and the Director-General of the Raw Materials Research and Development Council, among others.

Part of the circular signed by the Finance Minister reads: “This is to convey that his Excellency Mr. President has approved Supplementary Protection Measures (SPM) for implementation of ECOWAS Common External Tariff (CET) 2022-2026 and excuse duties on non-alcoholic beverage, cigarettes and Tobacco products as well as telecommunication services with effects from 1st April 2022.

“A grace of 90 days commencing from the date of implementation of this circular i.e April 1, 2022, shall be granted to all importers who had opened Form M and must have entered into irrevocable trade agreement before the coming into effect of this circular to process and clear these goods at the prevailing duty rates.

“However new import transaction entered from the 1st of April 2022 will be subjected to the new import duty regime.”

Telecoms subscriber number continues to grow substantially, having increased from about 180 million subscribers in 2019 to over 200 million active subscriptions in 2020.

This represents an increase of over nearly 11 percent in total subscriptions.

Many countries in Sub-Saharan Africa such as Tanzania, Uganda, Malawi, Kenya, Rwanda, Ghana and Burundi currently impose excise duty on telecommunication services ranging between five per cent to 20 per cent.