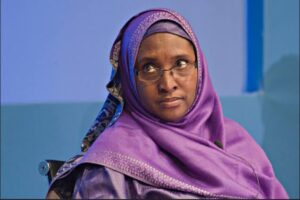 The Minister of Finance, Budget and National Planning, Mrs Zainab Ahmed, has claimed that the foreign rice smuggled into the Nigerian market is not good for human consumption.

Ahmad made the claim during a recent interview monitored by THE WHISTLER.

The minister while commenting on the gains of the Anchor Borrowers Programme which has gulped over N554.61bn also said Nigeria has become self sufficient in rice production.

Ahmed said, “We forget that we were importing rice into the country using foreign exchange that could be used for other things to import rice.

“So, the major benefit of the Anchored Borrowers Programme is that we are now actually all feeding ourselves with Nigerian rice and that is a huge achievement.

“We have become self-sufficient in rice production, we have also reached our target in maize production. We are still lagging behind in wheat production.

“Price of rice, which is the major staple consumed in the country, has been high. A bag sells for as high as N30,000.

“Unfortunately there’s a lot of distortion and the distortion is arising from smuggling of goods into the country, we have unpatriotic Nigerians that will bring rice that is poor quality, some of it not even fit for human consumption and come and dump it into the market making it problematic for the millers that are processing rice in the country to sell their own healthy high quality rice.

“In some cases, smugglers are even getting the rice for free, they rebag it and they bring it and sell it at a very low price making it problematic for the made in Nigeria rice.”

She said Nigerians have to understand that the imported rice is “rice that is classified not fit for human consumption in some countries and we have people that are unpatriotic enough to get it, bring it into our country and sell it for consumption.”

The minister said the market distortion does not mean that the commodity is not sufficient in the market.

She said “We don’t want a situation where we are subsidizing food, because we don’t want to create another subsidy. We are already battling with fuel subsidies. We are trying to exit it and it is a big problem.

YOU MAY ALSO LIKE:   PDP Denies Suspension Of National Chairman Ayu As Party Manages Crisis

“What we are doing is subsiding, encouraging and supporting the production of fertilizer. The Ministry of Agriculture is working towards bringing quality inputs and also they have research institutions that are developing quality inputs.