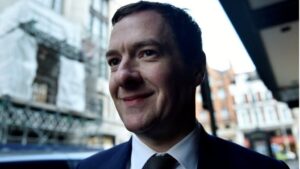 Former British chancellor George Osborne is to become a partner at one of London’s most exclusive boutique advisory firms.

“Robey Warshaw is the best of the best, advising great businesses on how to grow, and I’m proud to be joining this first-rate team,” Osborne said in statement provided by Robey Warshaw.

Osborne, who left politics in 2017, has become well-known for the portfolio of jobs he has taken on since leaving politics, including editing the London Evening Standard newspaper and advising money manager BlackRock. The former chancellor will give up his other roles to focus solely on Robey Warshaw, which he will join in April.

“We believe that George will significantly enhance the advice we give to clients,” a spokesperson for Robey Warshaw said. “He brings differentiated experience and expertise to our team from his leading roles in global finance over the past decade.”

Robey Warshaw was founded by ex-Morgan Stanley (MS) bankers Sir Simon Robey and Philip Apostolides and former UBS (UBSG.SW) dealmaker Simon Warshaw in 2013. The firm has quickly established a reputation as one of the preeminent firms in the bulge-bracket deal space.

YOU MAY ALSO LIKE:   145-Man Committee Set Up For Yusuf Buhari Wedding, Emir Coronation

Advising on such blockbuster deals has helped the firm make profits of over £200m since its founding. Profits are shared between the company’s three partners. The highest paid partner took home £10m last year and £27.7m the year before that.

Details of Osborne’s pay arrangements were not shared and a spokesperson declined to comment. Osborne, who was chancellor from 2010 until 2016, will be entitled to a profit share as a new partner.

“We remain hugely ambitious about our company’s future and believe that George will help expand our reach, and what we can offer our clients without changing the philosophy or ethos of our firm,” the Robey Warshaw spokesperson said.

YOU MAY ALSO LIKE:   Buhari Receives 2022 Appropriation Bill From National Assembly