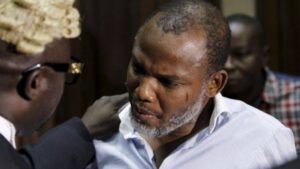 The special counsel to Nnamdi Kanu, leader of the Indigenous People of Biafra (IPOB), Aloy Ejimakor, has called for the immediate release of his client.
Kanu has been in the Department of State Services (DSS) custody since his arrest and extradition to Nigeria from Kenya.

The IPOB leader is being tried by the Nigerian Government for treasonable felony, arms stockpiling and other charges levelled against him.

But in a post via his Twitter page on Tuesday, Ejimakor asked the federal government to release his client first before talking about planning to dialogue with him.

The IPOB lawyer added that “it is unnatural to negotiate with a man in chains”, asking the government to “stop resisting every effort being made to release his client from detention”.

“When a man is in detention and you wish to negotiate with him, the first step you take is to stop resisting every effort being made to release him from detention.

“That’s how they negotiated with Mandela, Gandhi and Martin Luther King. It’s unnatural to negotiate with a man in chains,” he wrote.

Recall that Ejimakor had condemned the extradition of his client from Kenya to Nigeria and his continuous detention in DSS custody.

He had said, “it is fundamentally wrong for the Nigerian State to levy a lethal military attack on Nnamdi Kanu at his home in Abia State while he was free on bond and having failed to kill him, to then pursue him to Kenya and abduct him without due process of law.

YOU MAY ALSO LIKE:   We Have Mobilized Corp Members, Consultants To Replace Striking Doctors – Health Minister

“The abduction, the torture that followed and the unlawful imprisonment in Kenya, plus his consequent expulsion from Kenya to Nigeria, are manifestly unconstitutional and amount to infringement of his fundamental rights. There’s an unbroken chain of notorious violations that started in Afara-Ukwu, Abia State in late 2017 and culminated in Kenya in June 2021.

“It is trite that when a state forcibly takes a fugitive suspect from a foreign country to its territory without giving the person the benefit of the extradition process, it amounts to an act of extraordinary rendition that, without more, triggers insurmountable legal barriers to prosecution.

YOU MAY ALSO LIKE:   Important Things You Should Know About Late Captain Hosa Okunbo

“Under applicable laws, a renditioned fugitive is entitled to a body of remedies known as collectively reparations, which includes restitution, compensation, rehabilitation, satisfaction and guarantees of non-repetition.

“Nigeria needs to tread with caution and a keen reference to history as it ramps up on this overly aggressive treason trial of Mazi Nnamdi Kanu. When an alpha patriot like Kanu gets so upset with the system that he begins to seek solutions in separation or self-determination, you talk to him; you don’t subject him to trials and tribulations.”

Previous MAUREEN BADEJO SUFFERS ANOTHER HISTORIC DEFEAT AS SHE LOSES APPEAL AGAINST MFM IN THE UK
Next 2023 Elections: Shiekh Gumi sends crucial message to INEC