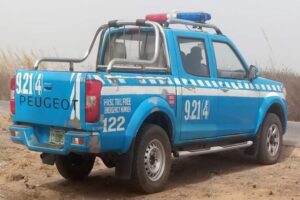 A motorist, Lemi Jonathan, has called out the Federal Road Safety Corps (FRSC) for allowing its officials use a van with four expired tyres.

Jonathan said the officials arrested and booked him because his vehicle tyre had expired.

But when he checked the tyres of their patrol van used, he discovered that four of them were expired.

In a post on his Facebook page, Jonathan highlighted the fact that FRSC was guilty of the same offence he was booked for.

“They stopped our vehicles and charged the second car with me with an expired tyre offense.

“I acknowledged the fact that the tyre they saw is above years, but all my pleas fell on deaf ears.

“I got angry at their adamant attitude. They still booked us for the offense.

One of the expired tyres found on an FRSC patrol van
“Then I looked at the tyres of their vehicle and saw that their tyres were all expired.

“I asked their driver how long a tyre should stay before it expires, he said four years.

“I asked him if he was aware that their tyres were all expired, he said he was aware but that they has written to their Command for over a year now but they refused to change the tyres but asked them to manage them.

“How could they be charging me for the same offense they are massively committing?

“Mine was a tyre, theirs were all tyres. He said immunity covers them. How can this be right?”