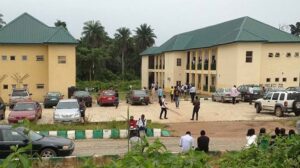 The Federal University, Oye-Ekiti (FUOYE) has released an internal memo which banned students from riding cars to the campus
Naija News understands that the school management lamented the recklessness of some students bringing cars to the campuses, noting that the development has become a threat of life to commuters and pedestrians.

The memo titled ‘Prohibition of use of cars by students on the University Campus” and dated November 10, 2021’ read thus: “The University Management has noted with deep disappointment, the indiscriminate and reckless driving by some students within the University. This has put commuters and pedestrians at high and unnecessary risks.”

YOU MAY ALSO LIKE:   CAN Raises Alarm as El-Rufai moves to Demolish 110-year-old church

“Consequently, Management has directed that no student be allowed to drive/use any car on the University Campuses with immediate effect,” the memo signed by FUOYE Registrar, Mufutau A. Ibrahim added.

All students concerned have been directed to henceforth pack their cars properly outside the campuses, Naija News reports.