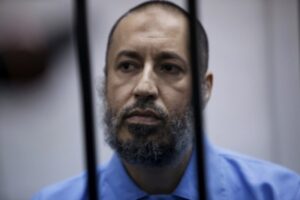 The latest development was confirmed by a Libyan official source and a unity government source on Sunday.

Muammar Gaddafi was outsted and killed during the 2011 NATO-backed uprising. During the fallout of uprsing, Saadi Gaddafi fled for Niger but was extradited to Libya in 2014 and has been imprisoned since then in Tripoli.

Reports say that he immediately departed on a plane to Istanbul after his release.

Deal of the day
Saadi, now 47, was known for his extravagant lifestyle during his father’s dictatorship.

The former professional footballer had been held in a Tripoli prison, accused of crimes committed against protesters in 2011 and of the 2005 killing of Libyan football coach Bashir al-Rayani.

YOU MAY ALSO LIKE:   Prophet Joshua Iginla Church Celebrates 14th Anniversary Amidst Funfair

During the uprising, three of the dictator’s seven sons were killed, and the country has since sunk into chaos, with rival factions vying for power.

A 2020 ceasefire ended the factional fighting and paved the way for peace talks and the formation of a transitional government this March, ahead of elections set for December.

But preparations are marred by disputes between key stakeholders over when to hold elections, what elections to hold, and on what constitutional grounds.

Libya has suffered chaos, division and violence in the decade since the uprising. The Government of National Unity was installed in March as part of a peace push that was also meant to include elections planned for December.

In 2018 the Justice Ministry said Saadi Gaddafi had been found not guilty of “murder, deception, threats, enslavement and defamation of the former player Bashir Rayani”.

In July the New York Times said it had interviewed Saadi’s brother, Saif al-Islam Gaddafi, who was held for years in the town of Zintan, as his supporters indicate he will run in the presidential elections planned for December.