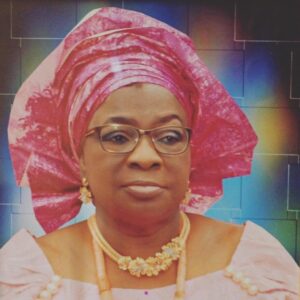 Mrs Amudoaghan who died last Thursday at 78 years, was a Catholic and member of Our Lady of Fatima Catholic Church, Aguda, Surulere, Lagos.

The late Victoria Amudoaghan was a very hardworking and enterprising woman, who was bornGbenga Adey at Kwale in Ndokwa West Local Government Area of Delta State.

In his condolence message, Gbenga Adeyinka, who is one of Nigeria’s most sought-after Standup comedians and Master Comperes (MC), prayed for God to give the deceased family the fortitude to bear the big loss.

“It was in total subjection to the will of God that I received the saddening news of the passing of the mother to our dear former Oyo State first lady, Her Excellency, Dr. Mrs Florence Ajimobi, knowing that we have been created by God and that someday, we all will appear before our creator to give account.

“Mrs Victoria Amudoaghan was a good mother, she was an amazon in whom her beloved daughter saw virtues that she picked. She lived an accomplished life and she survived in health to see her children, grand-children and great grand-children.

“Although we do not mourn as those without hope, I must commiserate with the entire Amudoaghan’s family of Delta state, and most especially, Her Excellency, Chief Florence Ajimobi for the loss. It is my sincere prayers that the soul of the deceased be granted a good repose in the hereafter and that the family find the fortitude to bear the loss,” Adeyinka states.

@societygazette
Previous ‘How Obaseki Paid Edo PDP Billions Before Re-Election, Facing Challenges As Party Leaders Push For Juicy Appointments
Next ‘I Am Not Perfect’, 2Face Idibia Says As He Shares Loved Up Photo With Wife, Annie To Mark 46th Birthday