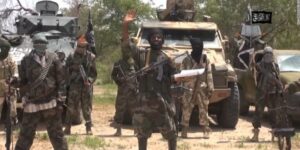 Members of Boko Haram have taken over farmlands and farming activities in Geidam town, in the Geidam Local Government Area of Yobe State.

The insurgents, who displaced majority residents of the town, were also said to have taken to preaching jihadist sermons to the few remaining people, mostly aged men and women, while also giving cash to them.

Gambo Abdullahi, an indigene of Geidam residing in Damaturu, said the town was still being occupied by the insurgents, while the Nigerian army troops were restricted to the western area.

He said, “The Boko Haram fighters are still in Geidam, they are in charge of the town.

“Since they sent everyone out of the community, they have been preaching radical sermons to the old men and women that stayed behind. After the preaching, they give N20,000 to convince them to join them in the Jihad movement.

“They have also taken over the farms of locals. They are harvesting the villagers’ produce and also weeding out grasses as if they will be in the town or a long time.”

Another local source in Damaturu, Mohammed Saleh, said some of the few people that stayed back in the displaced community had fled by foot to a nearby Kalgeri community.

He said, “Their is no vehicular movement to Geidam town as every vehicle stops at Kalgeri, my parents left Geidam for Damaturu yesterday. They trekked several kilometers to Kalgeri where they boarded a car to Damaturu.”

Meanwhile the Chief of Army Staff, Lt. Gen. Ibrahim Attahiru, during a visit to the operational theatre of the Operation Lafiya Dole in Maiduguri on Thursday, said a cache of arms was stolen from the Nigerian Army base in Mainok by Boko Haram insurgents who attacked the base last Sunday.

He said the war would be won by the Nigerian Army because more arms would be supplied to end the counter insurgency fight.

“We have defeated the Boko Haram insurgents several times. If for one time they came and we lose some equipment, I can assure you we will overcome. The COAS assured.