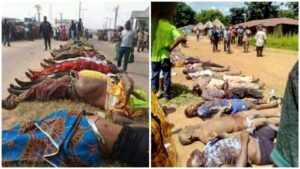 Nigerians are currently angry at the Benue State Government and its governor, His Excellency, Ortom, over the death of 36 persons yesterday and 150 in the last seven (7) days. (Read More Here).

It was reported that over 36 people, including college students were killed by Armed Fulani herdsmen at Shikaan Mbagena Kpav, a TIV community in Benue State, in the early hours of Thursday.

Currently the hash tag #BenueUnderAttack is trending on social media. The genocide in Benue is currently making Nigerians react in anger. They (Nigerians) are dragging Governor Ortom over the failure to protect his people.

KATOR TARKAA
@KatorTarkaa
It is impossible that all of the reports coming out of Benue and other middle-belt states are false. And it doesn’t matter who the perpetrators are. Whether foreigners, unknown gunmen, or indigenous arm-wielding gangs, this tidal wave of killings must be stopped.

timi Eagle
@timiPR
Has the government given immunity to Fulani herdsmen in this country ? They are killing the indigenous occupants of Benue state and nothing is still being done.
This is pure Genocide.

KOLA• Pushpin
@Ngr_KOLA
#BenueUnderattack
Out of the 23 local government areas in Benue state, the Killer herdsmen have invaded
and occupied 14 and may invade the remaining 9 if urgent measures are taken to curb this Genocide.

William
@_SirWilliam_
Tired of saying #BenueUnderAttack, it’s exhausting.
Killings been going on for years by one group of people, and nobody has been arrested, nobody has been prosecuted.
The solution right now is State Police and arming the citizens, nothing else.

YOU MAY ALSO LIKE:   Peter Obi to Ngige: Your achievements can’t stand mine

FS Yusuf
@FS_Yusuf_
Ortom needs to know that terrorists have opened a war on his people and he has to prepare his people to fight and protect themselves. Make we forget all the English wey we dey speak here. All of us dey mad! They are killing innocent Christians in Benue State.

YOU MAY ALSO LIKE:   Release: Committee on Onigbinde's Autobiography felicitates with Baba @ 83

Aproko Doctor
@aproko_doctor
We can’t fold our hands and watch anymore. #BenueUnderAttack
People are being killed in their homes and lands and the government is watching. This is a ticking time bomb.
Protect all Nigerian citizens.

KATOR TARKAA
@KatorTarkaa
As the killings keep rising and nothing substantial is being done, we all in Benue State and the entire Middle Belt may end up losing our lives, our identity and our land if we fail to rise up now! This is a genocide and must be referred to as such!! #BenueUnderAttack.