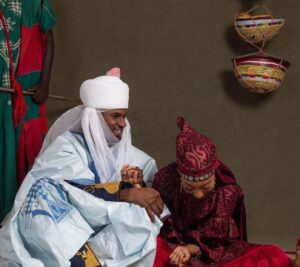 All roads today lead to Bichi town, the seat of Bichi Emirate in Kano State as Yusuf Buhari, the only son of President Muhammadu Buhari, ties the knot with Zahra, the daughter of Alhaji Nasir Ado Bayero, the Emir of Bichi.

The wedding, which has been the talk of the town and subject of talks and controversies on the social media for months, has been tagged the merger of presidency and royalty.

The president, who just returned from work and medical trip abroad, is expected to grace the occasion, according to the planning committee raised by the Bichi Emirate.

As such, heavy security is being expected to be deployed from Kano City, from the nation’s commercial centre, to Bichi town – a distance of about 30km – for the wedding Fatiha which will be held at the Bichi Central Mosque by 1:30pm.

In June, no fewer than seven governors visited the Emir of Kano, Aminu Ado Bayero, the elder brother of Zahra’s father, to formalise plans for the wedding.

Following the visit, the Bichi Emirate Council set up a 145-man committee to plan both the wedding and the formal coronation ceremony of the emir, the bride’s father, scheduled for Saturday.

While Yusuf needed little or no introduction, little was known of Zahra until the news of her engagement to Nigeria’s ‘first son’ broke.

YOU MAY ALSO LIKE:   NEW Details Emerge On Babatunde Gbadamosi New Wife That Made Him Lose Amen Estate

The 20-year-old bride is a final year student of Architecture in a university in the United Kingdom, where she and Yusuf were said to have met. She is the second daughter of Alhaji Nasir Ado Bayero, the Emir of Bichi.

In an exclusive interview with Daily Trust as part of the preparation for the twin event, the Emir of Bichi spoke on how painful it is for him to give away any of his children in marriage because of how close he is with them.

Zahra’s elder sister was married off earlier in the year, he said.

“I’m very close to my children, so sending away Zahra is also an issue for me, but we thank God.

“She’s a young girl, only 20; and she’s in her final year in the university studying architecture.

“I would have loved for Zahra to stay and finish her school and live with me a little longer, but we cannot change what God has ordained, we can only pray and wish them a successful married life,” he said.

The business tycoon turned monarch, who seats as chairman of the Board of 9mobile as well as several other companies, said he took solace from the Hadiths, especially the part where Prophet Muhammad (PBUH) said, ‘When you successfully raise three daughters and marry them off, Allah will give you a place in paradise’.

“This is my prayer and hope that through them God will give me Aljannah,” he said.

As with events of its nature, the days before the wedding have not been without some issues about it dominating social media.

Daily Trust reports that pictures of the bridal shower of Zahra a few weeks ago had got many talking on social media platforms, with critics describing the outing as another double standard in the way Hisbah, the Islamic police in force in Kano and other Northern states, treats issues when it involves high profile personalities and the masses.

While some berated the emir’s daughter for ‘wearing a bare-chest gown and not covering her head as expected of a Muslim lady”, others complimented her beauty and prayed for a successful wedding.

But the couple’s pre-wedding pictures had shut the mouth of even the harshest of their critics, as social commentators noted.

The concept behind the pre-wedding pictures was a blend of the rich Hausa culture with its royalty as the groom is not just the son of the country’s president but a high ranking titleholder in his home town of Daura in Katsina State.

YOU MAY ALSO LIKE:   Amaechi Denies Saying Stealing Public Funds Is Done Quietly Under Buhari Government'

He was recently turbaned as Talban Daura by the Emir of Daura and his bride is a daughter of a first-class Emir in Kano State, who is also a consummate business magnate.

Ceremony a torch of hope?

Speaking on the preparation for the twin event, Emir Nasir Ado Bayero told Daily Trust that everyone had been in a celebratory and preparatory mood for a while because there were lots of things to be done.

“We are on top of it I believe with the help of everybody… So, I think we would and I pray we would succeed,” he said.

In an era known for its digression from the culture of modesty to ostentatious display of opulence during ceremonies like weddings and funerals, the emir said his daughter’s wedding to the president’s son (and his own coronation ceremony) is not just about the celebration itself.

“It is about the progression, the hope we put in people; the ability to drive them and change their lives and make them happy to the best of our ability.

“So, celebration to me, I wish I can fast-track it and get on with what I have to do,” he said.