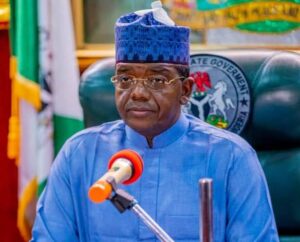 The Zamfara State government has confirmed reports about the killing of 13 police officers by armed bandits in the state.

The State Governor, Bello Matawalle in a statement on Sunday, said he was shocked and devastated by the incident.

Society gazette had reported thirteen policemen and three others were killed by bandits in an attack on Kurar Mota community in Bungudu Local Government Area of Zamfara State.

Reacting, Governor Matawalle in a statement by the Director-General, Media, Public Enlightenment and Communications, Government House, Gusau, Mallam Yusuf Idris said the Governor has visited policemen injured during the attack.

The injured officers are receiving treatment at the Yariman Bakura Specialist Hospital, Gusau.

He added that the Governor has promised to work with security agencies to ensure those responsible for the act are brought to justice.

The statement said “It was on receipt of the news of the unfortunate incident that the governor … immediately rushed to the hospital to sympathise with those currently receiving treatment at the facility.

YOU MAY ALSO LIKE:   Reaching out to the poor is our mandate - BAT Foundation

“While lamenting the attack, Matawalle promised to partner with other security agencies in the state to track down the attackers and all their sponsors and collaborators with a view to bringing them to justice.

“The police officers were ambushed at a mobile police camp set up as part of the measures taken by the government to fight bandits in the state.

“Matawalle, who was highly devastated by the sad incident, said the troops are doing very well at the war front … and had decimated the number of insurgents in the area.”

In a separate statement, the Zamfara State Police Command has also confirmed the killing of the 13 officers with seven others injured by the attackers.

YOU MAY ALSO LIKE:   ‘ Go Home We Don’t Want You Here’ – Angry Parents Of Abducted Kaduna Students Chase Govt Officials

He said the operatives ran into an ambush while responding to a distress call.

“The attack occurred on Sunday at about 1230hrs, when Police Mobile operatives deployed at Kurar Mota Village were responding to a distress call with regards to an attempt by the bandits to attack some nearby communities.

“The police personnel, who ran into the ambush, exhibited resilience and gallantry by engaging the hoodlums, an effort that deterred the bandits from attacking the communities.

According to the PPRO, the State Commissioner of Police has also visited the injured operatives and assured that the bandits will be apprehended and brought to book, adding that they won’t be demoralized in their role of ridding the state of criminals.

YOU MAY ALSO LIKE:   Segun Agbaje Led GTBank where Cars are said to hold more Value than Human

“The Zamfara State Police Command has reaffirmed its commitment and determination to sustain its ongoing operation against the activities of recalcitrant bandits and other criminal elements in the state.

“A Special Anti-Banditry Operation is currently ongoing with a view to tracking down the assailants.

“The Commissioner of Police, Hussaini Rabiu, while visiting the injured policemen at the hospital reaffirmed that the unfortunate incident will not discourage the officers and men of the command from discharging their mandate of protecting lives and property of citizens.

“The Police Commissioner called on every law-abiding citizen to join hands with security agencies to successfully end the menace,” the statement said.

Previous Toast to Women In Leadership: Linda Ikeji Pays Courtesy Visit to Fidelity MD
Next After Cubana’s ‘burial of the year’, youths bombard Edochie for help on money ritual