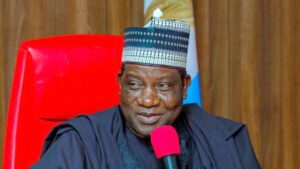 In commemoration of the 2021 Democracy Day and his six years in office, Governor Simon Lalong of Plateau State has granted pardon to seven prisoners in the state.

The Governor said the inmates were granted pardon based on their good conducts right from the different dates of their conviction.

Lalong disclosed this during a statewide broadcast to mark the 2021 Democracy Day and six years in office.

He said, “In the spirit of the 2021 Democracy Day and in thanksgiving to God for guiding us through the last six years, and in the exercise of the powers conferred on me as Governor in Section 212 of the Constitution of the Federal Republic Of Nigeria 1999 (As Amended), after due consultation with The State Advisory Council On Prerogative of Mercy, I have granted various categories of pardon to seven prisoners for their good conduct.

According to him, “All these pardons are granted for reasons of good conduct, with effect from the different dates of sentences.

The Governor listed the concerned persons to include; Nanfa Gwantur (Death Sentence commuted to life imprisonment).

YOU MAY ALSO LIKE:   How ECWA Reverend Silas Yakubu Ali was hacked to death in Kaduna