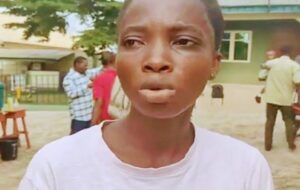 Omolayo Ojo, a school attendant who was reportedly kidnapped by gunmen after a school bus was hijacked on Thursday morning in Oba Ile Estate, Akure North Local Government Area of Ondo State, has briefly narrated her ordeal after regaining freedom.

According to reports from trusted sources, the released staff said the abductors blocked their school bus and brought out a battle axe and a gun.

She further reported that they dragged the bus driver out of the vehicle but took her along as they drove away into the bush.

It was also gathered that the gunmen had released her after they missed their target and had taken her to an unknown location where they threatened to cause her harm if she refuses to cooperate with them.

Omolayo Ojo said that she obeyed all their instructions and was allowed to go after they saw she was innocent.

YOU MAY ALSO LIKE:   Dapo Ojora Allegedly Commits Suicide

More information on the situation also revealed that the gunmen rode on motorcycles, and crossed the bus belonging to Chimola School around 6:45am when the driver was on duty of picking school pupils.

Omolayo Ojo was dropped off by her abductors in a bush at Ilara Mokin in Ifedore Local Government Area of Ondo state.

In a reaction, Mrs Bolatito Akindemowo, the Principal of the school, confirmed that no student was abducted and that the school is yet to find the school bus.