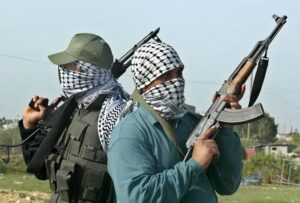 Unknown gunmen have released the traditional ruler of Pushit district in Mangu Local Government Area of Plateau state, Diket Gupiya.
Naija News reports that the district head was abducted by the gunmen at his palace in Pushit community on February 24, 2022.

The monarch was in his palace watching television around 9:pm when the gunmen attacked his house and whisked him away to an unknown destination.

YOU MAY ALSO LIKE:   2Face Idibia accused Me of sleeping with his wife - Brymo

The state Police Command has confirmed that the traditional ruler was released on Friday night after spending one week with his abductors.

According to the spokesman for the command, Ubah Ogaba, the monarch has been reunited with his family.

He said, “I just got a situation report over there and I can confirm to you that the kidnapped traditional ruler has been released and has been reunited with his family.”

Gupiya, who is a close relative of the state Deputy Governor, Sonni Tyoden, becomes the third traditional ruler to be kidnapped in the state in the past two months.

Previous BREAKING: Russia declares ceasefire in Ukraine
Next 2023: Obasanjo Names Presidential Aspirants that Should Be In Jail