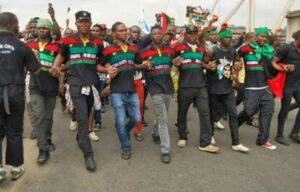 Gunmen suspected to be members of the outlawed Indigenous Peoples of Biafra (IPOB) on Monday stormed the Comprehensive Secondary School, Nkume in Njaba Local Government Area of Imo State and stopped students from taking their examination.

YOU MAY ALSO LIKE:   Living a Zilker Park Dream in Lagos as Zenith Bank Light-Up Ajose Adeogun with Christmas Decorations

According to Daily Trust, the students were preparing to sit for English in the ongoing Junior Secondary School Examination (Junior WAEC) before the hoodlums forcefully dispersed them.

Both teachers and students fled in different directions as the gunmen shot sporadically into the air.

The gunmen set ablaze some motorcycles belonging to some of the staff and students.

Although there were no report of casualties, a video of the incident showed the students and staff shouting and running for their lives.

Police Public Relations Officer, CSP Mike Abattam, could not be reached for comments.

IPOB had declared Monday as sit-at-home to drum support for the release of their leader, Nnamdi Kanu, who is facing some charges before an Abuja High Court.