Hardship Hits Synagogue Businesses As Hoteliers, Others Put Properties Up For Sale After TB Joshua’s Death 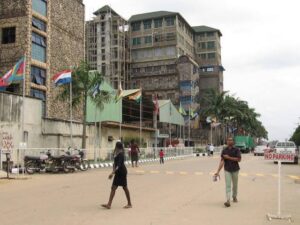 Businesses within the vicinity of the Synagogue Church of All Nations are facing untold hard times since the death of its founder, Prophet T.B Joshua Naija News reports.

A visit to the ground revealed that many outlets, including hotels, eateries, convenience stores, and business centers, which used to be a bubbling ground with activities and sales are closing shop.

According to the reports, this is due to the fact that many of their customers who were mostly foreigners who flock the church, while T.B Joshua was alive for spiritual tourism no longer come around.

Hotels owners due to the low patronage experienced took loans from the banks after things went from bad to worse after the delay that occurred in reopening of the church following the controversies over succession which pitched late T.B Joshua wife Helen, with some of the junior pastors of SCOAN, celebrityplusonline reports.

Unfortunately, the hotel owners who smiled to the banks when the church was bubbling with throngs of people were unable to service the loans, which brought about heavy pressure from the bank to repay the loans. Others, who were not under heavy pressure to repay loans, and could not fund their business due to low patronage have put up their property for lease instead of an outright sale.

Despite the reopening of the Church to normal worship a few months ago, the situation has failed to improve and the plight of the business owners remain what it is.

This is because traffic has waned drastically at the once boisterous church.