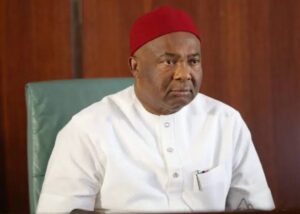 There is palpable tension in Imo State as the Imo state governor, Mr Hope Uzodimma, is expected to reveal sponsors of insecurity in the state today, Tuesday.

Stakeholders have started arriving at the venue in Owerri to listen to the names the governor will call as people behind series of kidnapping and killing across the state.

Uzodimma had promised late last year to name the sponsors on Tuesday (today).

The Sam Mbakwe Executive chamber in the government house in Owerri, the venue of the sitting, has been cordoned off by heavily armed security agents as stakeholders have begun to arrive.

Also present are the former Imo state House of Assembly, Speakers and Deputies, former and present members of the Imo state house of assemblies among others.
Details later…