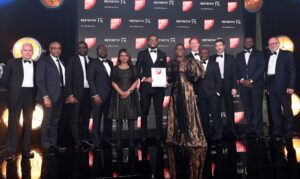 Heirs Oil & Gas (HHOG), Africa’s integrated energy company has been awarded the ‘Africa deal of the year 2021’by Project Finance International (PFI), following the $1.1 billion financing and acquisition of 45% stake in OML 17 in 2021. The award ceremony which took place on Monday, May 9 2022 in London was a gathering of senior industry leaders across various sectors to celebrate excellence.

“On behalf of the HHOG team, I would like to thank PFI for this great honour which recognises the OML 17 acquisition deal, while also acknowledging the efforts of the entire team involved in the transaction.” said Executive Director, Heirs Oil & Gas, Samuel Nwanze.

While acknowledging the award, Chief Executive Officer, Heirs Oil & Gas, Osayande Igiehon said “This great recognition reiterates our commitment to excellence in our bid to fulfil Africa’s unique energy needs and ensure that Africa’s natural resources are directed toward value creation on the continent.”