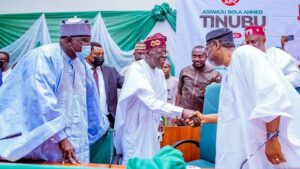 The All Progressives Congress (APC) caucus in the House of Representatives on Wednesday endorsed the National Leader of the party, Bola Tinubu, for the 2023 presidential election.

The caucus endorsed the former Lagos State governor during a visit to the National Assembly on Wednesday.

House Leader, Hon. Alhassan Doguwa, who led the lawmakers in the endorsement, spoke of Tinubu’s track record as Senator and governor.

He said the APC leader has all it takes to aspire to the presidency and has physical and mental capacity to run the affairs of this country.

Hon. Doguwa then put the question to his colleagues asking whether it was their wish to endorse Tinubu for the 2023 race to which they all answered in the affirmative.

Earlier addressing them, Tinubu described the National Assembly as a vital arm of government.

He noted that the legislators had made important contributions to the unity and stability of the country and sustenance of her democracy as the most direct representatives of the individual constituencies at the Federal level.

The APC leader said he was in the National Assembly to seek the lawmakers’ counsel, collaboration and support for his ambition.

House of Representatives Speaker Femi Gbajabiamila expressed surprise that many of those claiming to be in the race were sitting at home and not interfacing with Nigerians.

“I don’t think it’s good that Nigerians are still waiting six weeks to the primaries to know those in the race. It’s not fair on Nigerians,” he said.

YOU MAY ALSO LIKE:   Lagos Safe For Your Investments, Speaker Obasa Tells Qatari Government

He described Tinubu as one man who had indicated he would not take Nigerians for granted and would consult widely and talk to anyone who cared to listen.