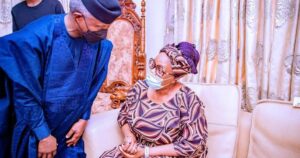 The Vice President of Nigeria, Yemi Osinbajo, on Sunday disclosed that he used to collect pocket money from the former Governor of Oyo State, Adebayo Alao-Akala.
Osinbajo during his condolence visit to the family of Alao Akala who died on January 12 described him as a generous, kindhearted and decent man.

He said, “Prof. Oyelowo Oyewo, the current commissioner for justice in Oyo state, was our link to him. If we needed little pocket money, we found a way of getting to our dear uncle. This was even long before he became governor of Oyo state.

“We have profound memories of him, a man who was exceedingly generous. He was a titan in politics. He was a very generous, kindhearted and decent man,” he added. “Long before I became a professor of Law, I had known our dear uncle Adebayo Alao- Akala. Any time I think about him, I smile because he was a very special being.”

Osinbajo further stated that he consulted the former Governor when he was nominated as the APC vice presidential candidate in 2015.

He added, “It was Prof. Oyewo, my friend, who arranged a meeting between us in Ikoyi, and he gave me advice. He said, ‘Professor, the vice-president’s seat is not a child’s play’, Mr Osinbajo recounted. “He was so generous. He gave me a lot of advice and much support.

“No one can know the extent of your pain and sadness. Only God can comfort you and keep you.”

The Vice President also prayed that Mr Alao-Akala’s children would be greater than he was.

Previous Idumota Bloodbath: We have no Hand in the Mayhem – King Kosoko Royal Family
Next Uproar As Nollywood Actress, Mercy Aigbe Unveils Father Of Four As New Lover