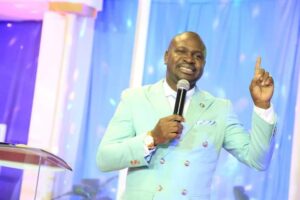 It is no more news that South Africa is currently under serious tension following the operations of rioters and protesters.

Some citizens have been killed in this unfortunate incident that has been rocking the country for some days.

This is not unconnected to the fact that the government in power has perfected plans to prosecute the former president of the country, Jacob Zuma.

He has been handed a 15-month jail term for contempt of court relating to corruption allegations against him. Following this development, there has been riot, killings, protest by his supporters threatening sanity in the country.

Meanwhile, a popular south Africa prophet, Samuel Akinbodunse, the general overseer of Freedom For All Nations Outreach (FANO) warned the ruling party and Government against going after Zuma.

He made this warnings during the release of his new year Prophecy in January, stating that an attempt to prosecute Zuma will threaten the country.

Just as he said, The country is not stable at the moment due to the prosecution.

YOU MAY ALSO LIKE:   The Jagaban of Borgu is not a saint but the best option for Nigeria 2023! - Hon. Khairat Animashaun-Ajiboye