How We Derived APC’s Change Slogan – Akande Opens Up 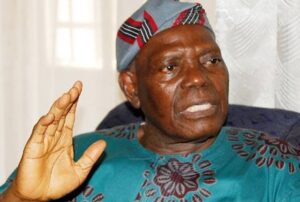 Former Interim National Chairman of the All Progressives Congress (APC), Bisi Akande, has revealed how the ruling party derived its change slogan.

In his autobiography titled ‘My Participations’, launched in Lagos on Thursday, Akande said the slogan was coined by US media and political consultants, AKPD, for the party in 2013.

Akande said that the consultants were hired by the national leader of APC, Bola Ahmed Tinubu, to help ACP boost its new image and coin messages acceptable to Nigerians.

The former Osun governor claimed that the consultants were hired as part of strategies to remove the Peoples Democratic Party (PDP) from office in 2015.

He said, “As we were putting the APC together, Bola Tinubu was of the opinion that we must do everything strategically and legally possible to upend the ruling PDP. While other politicians think of their states and possibly geo-political zone, Tinubu has a more holistic view. As far as he is concerned, Nigeria is one constituency. He is always thinking ahead. He is a comprehensive political strategist who does not take anything for granted. It was his strategic mind that changed a routine journey to America into a trip of serious historic implications.

“Howard Jeter, a former Ambassador of the United States to Nigeria, must have become acquitted with Tinubu during his service in Nigeria between 2000 and 2003. Tinubu was governor of Lagos State between 1999 and 2007, during the turbulent early days of Nigeria’s return to democracy when he had to confront the Federal Government of President Obasanjo on several constitutional issues. After Jeter retired from active diplomatic service, he and Tinubu remain friends and the two families became close. Therefore, it was normal for Tinubu to be invited to the wedding of Jeter’s daughter in Maryland slated for April 2013,

“Tinubu wanted me to come along to honour Jeter whom he described as a great friend of Africa. Howard Jeter also served as Ambassador to Botswana and later as Assistant Secretary of State for African affairs under President Bill Clinton. He said we would use the opportunity of our visit to do other things that would benefit our proposed party and our country. I have known Tinubu to be a wonderful strategic political thinker and I suspected he was thinking ahead. Indeed, he had other things on his plate beyond the wedding of Jeter’s daughter.

“To convince me, Akande wrote that Tinubu asked if he knew how it was possible for Barrack Obama, an African-American politician, to win the American Presidency twice in such a major white populated country like the USA.

“I had no idea. He convinced me that we should use the occasion of the wedding to interact with the gathering of African Americans to find out how. I conceded to him and we flew to America to honour the Jeters. We arrived in the USA on April 5, 2013 and checked into Four Seasons Hotel in Washington DC. The wedding ceremonies were on April 6. We exploited the occasion to have extensive consultations with some of our Nigerian and American friends. Among those we met were Professor Segun Gbadegesin, a brilliant teacher of philosophy at the famous Howard University in Maryland, and Ladi Delano among others. We reviewed our mission in America with them in the hotel.

YOU MAY ALSO LIKE:   Lekki Shooting: Army Clarifies Carrying of Blank And Live Ammunition, Insists Only Blank Ammo Was Shot

“Professor Gbadegesin was not comfortable with our merger talk with the CPC and other parties and he kept on expressing his anxiety about our obstinate desire to venture into a strange partnership. We argued that every discovery that constitutes civilisations were based on experimentations. Also, many white American friends of Tinubu visited us during our stay in Washington and other cities. In the end, we accepted that the services of media and political consultants would be required. Quite a few such experts were introduced to us. Tinubu eventually invited a group called AKPD to advise us in Nigeria on how to boost the merger efforts and about the messages the new party should forward for it to be acceptable to Nigerians.”

Akande added that Tinubu single-handedly paid the consultants and also hired them to help set up a popular television station, Television Continental.

He added: “I believe it must have cost him a fortune in dollars to hire them. I know it was not funded by the party then since I was the acting National Chairman. I regarded such funding as Tinubu’s affair in party building and I always told him so. It was immediately after the same USA tour that he also took me round and introduced to me the new television complex, the TVC, as part of his preparations for the ongoing political project. I was secretly musing to myself as to what Bola Tinubu would have done if he was the one vying for the Presidency on the platform of the new party.

“Tinubu again hired and reassigned the media consultants, AKPD, to extend their findings to the rest of Nigeria. In earnest, AKPD began creating a research-based quantitative nationwide survey, organizing message summits with party leadership and stakeholders at various levels, assembling qualitative focus groups with crafted questionnaires, data modulation, party branding and message delivery strategy to the APC 12million registered members and the voters generally from sets of created ‘communication war room.’ By January 2014, AKPD came out with preliminary result forecasts and advices for improvement. The major advices were that APC must keep talking about CHANGE and JOBS.

“They stressed that the largest reason voters would support APC at that time was that they wanted change and APC should continue to say ‘APC means change’ over and over again. When talking about what that change means, they advised that the most important thing to stress is that change means more jobs. All communications on specific policies like education, infrastructure, rural development, fighting corruption, insecurity and so on, should be tied back to how fixing that policy would help to create jobs and would bring Nigerians the change they needed. AKPD stressed that in their polling, voters were telling them that they wanted to hear more of ‘change for jobs’ and APC redoubled its efforts on this message. This is something APC had done effectively and its acceptability had increased tremendously.”

Tags How We Got APC's Change Slogan - Akande Opens Up