Home / cover / I don’t Have Soap To Cut For Any Youth Looking for Quick Money, Work Hard – Obi Cubana

I don’t Have Soap To Cut For Any Youth Looking for Quick Money, Work Hard – Obi Cubana 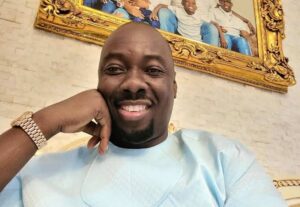 I don’t Have Soap To Cut For Any Youth Looking for Quick Money, Work Hard – Obi Cubana

Chairman of Cubana Group, Obi Iyiegbu, popularly known as Obi Cubana, has stated that he does not have “soap” to cut for any youth looking to make quick money.
Society gazette had reported the lavish display of wealth in Oba last Friday Obi Cubana buried his mother was in grand style.

Obi Cubana, who reportedly lost his mother in December 2020, laid her to rest on July 16th 2021 in Oba, Anambra state.

The funeral’s preparations caught the attention of many after the club owner received 246 cows from his friends.

Obi Cubana also bought a diamond chain and pendant from a popular jeweller, Efobi Stephen, which had his late mother’s face engraved on it.

Many youths have since taken to social media to hail the nightclub boss asking him to “cut soap” (which means introduce them to ritualists) for them.

Speaking in an interview with BBC News Pidgin on Tuesday, Obi Cubana advised youths to work hard and earn a better life.

While urging youths to work hard to make their money legitimately, the businessman stressed his belief in the power of prayer, God, hard work and investment in quality circle of friends.

YOU MAY ALSO LIKE:   Prophet Joshua Iginla storms Lagos for Prophetic Crusade in April

“We didn’t plan for one-fifth of the crowd at the funeral,” he said. “But see what happened at the burial. People have been saying that Obi Cubana has money, which money? They need to know people who have money in Anambra and in Nigeria. It is not about money but goodwill. What happened that day, money can’t buy it. See the mammoth crowd, yet nobody was raped, no car was stolen and no one was attacked. It can only be God.”

YOU MAY ALSO LIKE:   Winners emerge in Heritage Bank’s 'YNSPYRE', Cream Platform Promo

“I do pray before I leave the house. I pray because if you don’t pray your body will be naked and prone to different attacks,” he added.

YOU MAY ALSO LIKE:   PRUDENTIAL ZENITH LIFE DONATES $100,000 USD TO SLUM2SCHOOL TOWARDS FIGHTING EFFECTS OF COVID-19 IN NIGERIA