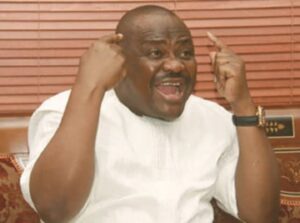 Wike also accused Babangida of being a ‘mole’ in the party. The Rivers state strongman disclosed that it was unfortunate that the PDP has continued to allow the former Niger State governor to remain a member of its highest decision making body after he publicly confessed to working alongside others to frustrate former President Goodluck Jonathan’s second term bid in 2015.

He made this comments during a media chat at the Rivers state government house on Monday. He added, “The same Aliyu in 2017 was one of those who opposed Secondus to be Chairman of the party. He only came on board at the dying minute when he knew Secondus was coasting to victory.”

“The governor also clarify that he was not aware if the PDP national chairman has disagreement with stakeholders of the party in Rivers State.”

Wike insulted Babangida stating; “Governor Aliyu Babangida comes early for meetings to sit in front and bulge out his eyes. People like him are noisemakers”.

“Aliyu thinks it was that time they were moving around to fight PDP, I will flog hell out of him”.

It was gathered that Babangida had accused Wike of being a ‘dictator’ in the PDP.