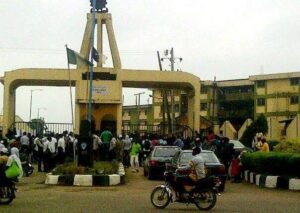 There is anxiety among students of The Polytechnic Ibadan following the shooting of a female student of the institution.

The lady, Taibat Babatunde, was reportedly shot on the campus in the evening of Tuesday and some students claimed one of the security personnel of the school fired the shot that hit the female student.

They said the security men had gone to the Sewage Hall on the campus to arrest a student but while shooting in the air, a stray bullet fired by the security man allegedly hit the lady.

The management of the school has said the lady was responding to treatment while promising to unravel the identity of the person who fired the shot.

The Registrar of TPI , Mrs Modupe Fawale, in a statementmade available to our correspondent on Wednesday appealed to the students to remain calm.

The statement read, “The unfortunate incident happened at the sewage area late in the afternoon where a gun shot hit the female student.

“The female student was immediately rushed to the University College Hospital where a first class medical attention was given to her.

“We appeal to all students and staff to remain calm and abide with all the regulations as investigations have been launched into the source of the gunshot.”

Previous Why is Obi Cubana with EFCC and not Tinubu or Abba Kyari? Reno Omokri Questions FG
Next Ex-Sterling Bank Manager Jailed 18 years for using customers’ Money for Ponzi Scheme