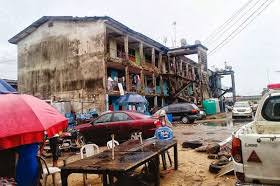 President of the Police Officers Wives Association and wife of the Inspector-General of Police, Hajia Haraja Usman Baba, has decried the proliferation of beer parlours in Police barracks, describing it as a bad influence on children and the future of Nigeria.

To address this, she disclosed that she would immediately send a signal to the Force headquarters for the outright relocation of beer parlours from Police barracks, threatening that whoever flouted the directive thereafter, would be ejected from the barracks.

YOU MAY ALSO LIKE:   Lanre Teriba bill for American Tour ...To perform at ICCS Summit

The POWA President who was on a three-day working visit to familiarise herself with POWA members in the state and also to access the Police children school, with a view to improving the general standards, said such beer parlours should be cited at a given metre from the barracks as stipulated by law.

Addressing POWA members at the POWA hall, Ikeja, she said, “During my inspection yesterday (Wednesday) I saw a lot of beer parlours in barracks. I know it is you people that encouraged such. You should try and speak to your husbands to follow the rules and regulations of the barracks.

“I grew up in the barracks because my father was a Policeman. Then, there was no beer parlour. And with the future of our children in the barracks, we should be careful because these children are more intelligent than us.

“We are going to send signals immediately, for the relocation of the beer parlours . If you don’t keep to it, you will be ejected out of the barracks”.

She also lamented the dirty state of barracks in Lagos and announced the commencement of environmental sanitation, every Saturday. She informed that she would personally take part in tomorrow’s own, after a 30 minutes walk with POWA members, as part of activities to mark her visit.