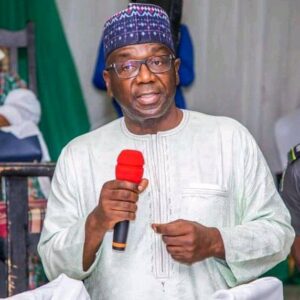 Amid the security challenges ravaging the country and the seeming helplessness of the Chief Security Officers of each state of the federation, the Special Assistant on Security to the Kwara State Governor, Hon. Moshood Gobir, has described Governor Abdulrahman Abdulrazaq as the most proactive governor on security matters in the North central Nigeria.

In a press release personally signed by Hon. Gobir and made available to National Association of Online Security Reporters, (NAOSRE), Kwara state chapter, the Special Assistant on Security lauded the leadership qualities of the state governor especially in the area of security.

He said, “Nigeria is presently facing serious security challenges on all fronts ranging from Boko Haram menace in the northeastern states to the cattle rustling and banditry in the north central states and the horror of herdsmen kidnapping in the southwest, but as the Special Assistant on Security to His Excellency, the Governor of Kwara State, I make bold to say that Mallam Abdulrahman Abdulrazaq is the most proactive Governor on security matters in the whole of north central states and one of the best in this regard in the whole country. His efforts have ensured that Kwara State indeed remains the State of Harmony.

“Just yesterday, (Monday) there was a serious high level security meeting at the instance of His Excellency, where all the stakeholders in security affairs in the state were present. Issues like how to make “Operation Harmony” joint taskforce more effective and efficient day and night, and other sundry efforts that will ensure that Kwara State continues to enjoy the peaceful status quo for which we are widely known were discussed.”

He stressed that all and sundry can see and feel the impact of the Governor’s commitment to security in Kwara state and urged all Kwarans and residents of Kwara to join hands and compliment the efforts of Governor Abdulrahman Abdulrazaq by being law abiding at all times in order for Kwara State to live up to its repute as the State of Harmony.

Hon. Gobir however, warned trouble makers and criminally minded individuals to steer clear of Kwara State as all the security agencies in the state are at alert to respond adequately and appropriately to any attempt to breach the security of lives and properties of Kwara residents.

He further stressed that Ignorance of the law is not a tenable excuse where the security of the people is being infringed upon.

YOU MAY ALSO LIKE:   2023: Atiku Meets Mark Over PDP Chairmanship Position, See Details

The Governor’s aide also commended all the security agencies in the state for the cooperation enjoyed so far in the efforts at securing lives and properties of Kwara residents.