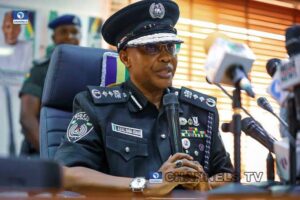 The Inspector General of Police, Usman Alkali Baba gave this directive on Wednesday during a meeting with the Force’s Strategic Police Managers.

The managers including the Assistant Inspectors-General of Police, Commissioners of Police, and the Force Management Team met with the IGP in Abuja to deliberate on strategies to curb the growing incidences of insecurity.

The chief boss expressed concern over the proliferation of arms in sub-Saharan Africa which has consequently led to an increase in security threats within the nation, notably the attack on the Kuje Correctional Facility in Abuja.

“The IGP equally directed all strategic police managers to commence an immediate special visibility policing operation across all Commands taking into cognizance crime mapping, and massive deployment of operational and intelligence assets and manpower,” a statement by the Force said.

The statement signed by the Force Spokesperson, CSP Olumuyiwa Adejobi acknowledged the compliance level of strategic managers in identifying vulnerabilities at custodial facilities in their respective areas and complementing the Correctional Service in upscaling security in and around such facilities to forestall further security breaches.

Similarly, the Chief of Defence Staff, Gen. Lucky Irabor, on Wednesday said the Armed Forces was working round the clock to implement several new strategies to halt the various security challenges in Nigeria.

Irabor said this while delivering a lecture at the National Defence College on the topic “National Security and Development: Strategic Options for Nigeria’’ on Wednesday in Abuja.

YOU MAY ALSO LIKE:   Ogun Governor, Dapo Abiodun Reportedly ‘Relocates’ To London Over Undisclosed Ailment

He disclosed that the Armed Forces were working on upgrading the intelligence management procedures of the defence and security sector to strengthen the overall security architecture in the country.

In addition, Irabor urged the media not to become a tool of criminals by promoting terrorists’ agenda, but to uphold the interest of the public while carrying out its duties.

YOU MAY ALSO LIKE:   Exposed! How Powerful Cartel Plots To Frame Prophet Iginla For Kidnap And Multiple Murders ( Video, Pictures)

He said, “The media should report on such incidents in an independent and authentic way, but not allow itself to be made the tool of criminals

“The German Press Code for example says in reporting actual and threatened acts of violence, the press should carefully weigh the public interest in information against the interest of victims and other people involved.”