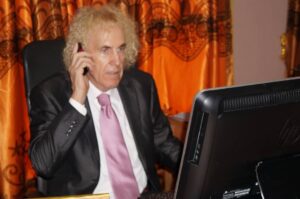 expressed the readiness and commitment of his organisation to compliment the effort of African leaders in ensuring economic growth and halt poverty advancement on the continent.

Tuinstra believes that with the enormous resources in Africa and the capacity of its citizens the continent only requires partnership from development oriented
organization to maximize the potential.

The ISG & Partners CEO noted that most African leaders are adequately prepared to change the fortune of their various countries but are limited in financing to actualize their objectives. He said having lived in Africa for no less than 2 decades he can confidently declare that the leaders are indeed focussed and are willing to improve on the economy of their nations.

Speaking through ISG’s Director of Media,Moses Owopade, Tuinstra promised that ISG & Partners across the world will extend their financial capacity to improve the economic growth on the continent.

According to the ISG & Partners CEO, to create economic growth we have to start with the infrastructure such as transport and energy.

”For example 600 million people in Africa still have no access to electricity. Investing in health care makes no sense at all as long as the ordinary people do not have the money to use it. The people who can afford it go abroad”

According to him, the Chinese government has lifted 800 million people out of poverty in 10 years.

YOU MAY ALSO LIKE:   Bandits Demand Petrol, Viju Milk To Free Kidnap Victims In Niger State

”We can also make this happen in Africa. As a direct result of
infrastructure development, entrepreneurs have the opportunity to start a new business and need staff to do so. On this way you will create job in Africa so that the ordinary people can also go to the hospital when they have health complaints, and then the time is also right to invest in health care”

YOU MAY ALSO LIKE:   NYSC Announce Changes On Graduation Certificate – To Start With 2021 Batch ‘A’

He said good railway services will enhance cheap and good
movement of both goods and services on the continent, even as
he noted that Africa has got quality people, good climatic condition
and education that can improve and increase wealth on the continent.

YOU MAY ALSO LIKE:   Police in Ojota fire teargas at hoodlums not June 12 activists

The ISG & Partners boss also stressed that the need for young Africans to immigrate to other continents will diminish when they can find a good job with prospects in their own country.