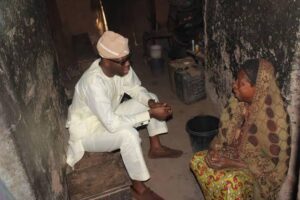 IBADAN – The son of late former Oyo State Governor Lamidi Adesina, Dapo Lam-Adesina, on Friday evening paid a condolence visit to the mother of slain Rahmon Azeez, who was killed by thugs, suspected to be men of the Park Management System (PMS) on Wednesday at Iwo Road area of Ibadan North-East Local Government.

Recall that a disagreement broke out over parking spaces between the members of Mukaila Lamidi popularly known as Auxiliary and the shop owners at the late Rahmon’s shopping complex, which led to the killing of Rahmon, the Lead City graduate while leaving several people injured.

YOU MAY ALSO LIKE:   Polaris Bank in N19 Million Criminal Deduction Mess

The former lawmaker, who represented Ibadan North East/South East federal constituency between 2015 and 2019, while consoling the deceased mum, explained that it was sad that the state is gradually sliding into anarchy.

He said the rise in violence, if not immediately curtailed, could move the state 10 years backward.

He said, ”This sad event affects us all. I may not know the deceased like that but I know Ahmed, his elder brother. The deceased was one of us, one of the brighter stars any state would be proud of. He didn’t say because the mum is well-to-do and sit down idling away. He was still ‘hustling’, doing businesses to excel.

“Ma, I received a call from a friend in Canada yesterday. It was his birthday and we got talking. He said the only birthday gift I can give him is to join others to ensure justice for the deceased. See, it is not about Rahmon alone. Let’s concede he is gone. Who knows who is next? I have always lived my life here. But we cannot thrive in an atmosphere where peace is elusive.

“It is enough. All of us must join hands together to ensure this is tackled. And this is also a lesson for us all. When it is time for election, let’s take our time before thumb-printing that ballot. It means a lot. Don’t vote for those who don’t have anything for you except violence. It is so sad”.

He, however, called on Governor Seyi Makinde to ensure that justice is done, stressing that any government that cannot guarantee the security of lives and property has failed.