J Martins, Daddy Showkey to Perform at Tribute to Our Troops Concert

J Martins, Daddy Showkey to Perform at Tribute to Our Troops Concert 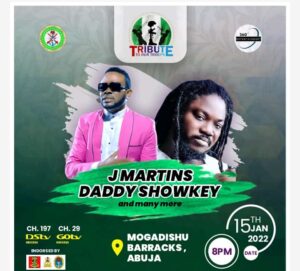 The Defence Headquarters wishes to inform the general public to watch the live broadcast of the “Tribute to our Troops Concert” showing on DSTV Channel 197 and GOTv Channel 29, Saturday
15 January 2022 by 8pm.

The Tribute to our Troops Concert which would hold at the Mogadishu Military Cantonment football field will feature many artistes, including J Martins and Daddy Showkey to celebrate troops of the Armed Forces in the frontline.

YOU MAY ALSO LIKE:   Lagos Designer, Kiki Okewale Shines In Bangkok

The concert which is in commemoration of the 2022 Armed Forces Remembrance Day Celebration will no doubt boost the morale of the troops towards suppressing enemies of our dear Nation.

Thank you all for supporting the Armed Forces of Nigeria.