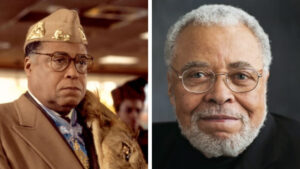 Happy birthday to a Hollywood legend! James Earl Jones celebrated his milestone 90th birthday on Sunday, and got a lot of love from some of his famous friends and fans.

Jones’ booming voice, powerful gravitas and daunting screen presence have made him a true screen icon, and his impressive performances have left an indelible mark on pop culture throughout his nearly 70-year career.

As the voice of both Darth Vader in Star Wars and Mufasa in The Lion King, Jones has been an unforgettable and integral part of so many generations of movie fans. His body of work also includes award-winning performances in a slew of comedies and dramas — including Coming to America, The Sandlot, Field of Dreams and countless others.

It’s no surprise then that the celebrated figure was showered with love and effusive praise as he celebrated his big 9-0 on Sunday. Celebs including Regina King, Josh Gad, Wendell Pierce and many others took to social media to share the love.

The Oscar-winning actor recently spoke with USA Today about his plans for commemorating the milestone birthday.

“I will keep having to remind myself that it’s my birthday,” Jones shared. “I’ll make an exception and enjoy a slice of strawberry shortcake, my favorite!”

The actor told the publication that he is “feeling fantastic and grateful” and looking back at his career makes him “so proud of my work and accomplishments.”

“I love growing older and wiser with time,” Jones shared, adding that he plans to continue acting “for as long as I can.”