JCI Gives me Hope For a Greater Continent of Africa’ – Obasanjo

Former President of Nigeria, Olusegun Obasanjo has expressed delight, saying Junior Chamber International has reinstated his hope for a greater continent of Africa.

Obasanjo made this known at the Africa and The Middle East National Presidents virtual meeting held on Saturday.

The former President pointed that with the quality of young people in the organisation, he is more hopeful about the development of the continent of Africa through their impacting programs.

He however, urged the participants at the meeting to embrace change, saying it is the only thing that is permanent in the life of human beings and institutions, adding that nobody should be afraid of change.

According to Obasanjo, education and understanding the world we live in are major ways to foster positive changes around the world as people need to realize for that change is imminent.

“You must prepare yourself educationally for the world that is changing. Your education must be far and wide enough to prepare you for the changing world. I am not talking about classroom education alone, I am talking about education you get in all facets of life”, he pointed.

He added that people don’t appreciate the community they live in, let alone the nation and region they live.

“We must mentally and psychologically prepare for the world we live in. When we talk about change, some change will be gradual; some will come like Tsunami or storm. Whether it is political, technology, social or other sort of changes, we must be very prepared for it”, he said.

YOU MAY ALSO LIKE:   Osun 2022: Aregbesola Speaks On APC Primary Election

Obasanjo commended the determination of JCI’s members in their effort to make the world a better place to live, urging them not to forget their coming together which is stronger than their individual capacity.

The former president also called the presidents at the meeting to further identify problems at their different nations and find ways to solve them.

YOU MAY ALSO LIKE:   Basketball Star Lebron James Invest £540m in Sport Group that Own Liverpool FC

“African and Middle East are faced with the problem of insecurity; your responsibility as youths and members of JCI is to ensure peace in those regions of the world. There are a lot that we can do to bring out some of these solutions in your regions”

On the issue of the pandemic, he said there must be ways to do something in every corner of the world,  Tough time does not last forever, tough people overcome tough time”, he urged.

YOU MAY ALSO LIKE:   'Backstabbing is a habit' - Omokri blast Osinbajo for contesting against Tinubu

“From my experience with JCI over the years, I believe that the members all around the world have a lot to offer to everybody in all over the world.” he said.

In his words, the National President of JCI Nigeria, Abiola Olorunnisola appreciated the former president for his fatherly wisdom and the advice he has offered to the national presidents of the organisations in different countries of Africa and the Middle East.

Olorunnisola promised that all the advice given by the former president will be adhered to and will help the organisation in making future plans in driving development changes in both Africa and the Middle East. 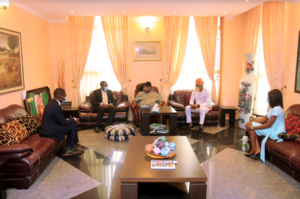