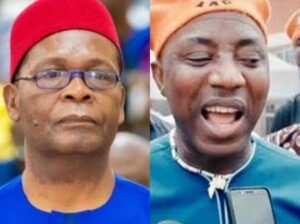 Joe Igbokwe, a chieftain of the ruling All Progressives Congress (APC), on Monday condemned Omoyele Sowore, a former presidential candidate, for ‘wasting his precious gift of time on acrimony and division, pull him Down syndrome, armchair criticism, unsubstantiated allegations’ against oppositions.

Igbokwe was reacting to Sowore’s latest criticism of Bola Tinubu, the APC National Leader, who just returned from the United Kingdom (UK).

In photos circulating on the internet, Tinubu, 69, had appeared in a stylish wear, looking youthful.

YOU MAY ALSO LIKE:   How I Was Promised A Job In The UK And Not Organ Donation – Ekweremadu’s Donor, David Tells His Story

Sowore took to his verified Facebook page to quote: “You can fool some people sometimes, but you can’t fool all the people all the time #WeCantContinueLikeThis,” to which Igbokwe responded: “it is not good to continue to waste your precious gift of time on acrimony and division, pull him Down syndrome, armchair criticism, unsubstantiated allegations etc.”

YOU MAY ALSO LIKE:   Outrage As VIP Orders Maids To Assault Her Female Orderly In Abuja

Recall this newspaper had reported how Tinubu jetted out of the country in January after weeks of consultations across the country over his 2023 presidential ambition.

He was rumoured to have visited the European country to rest and undergo medical checkup, while a source in his camp said he went to visit his family in the UK.

YOU MAY ALSO LIKE:   NFF Set To Announce New Super Eagles Coach Thursday

While in London, he had meetings with the UK chapter of the APC.

In January, Tinubu visited President Muhammadu Buhari during which he announced his intention to contest the presidency in 2023.

Previous I am not a polygamist, Odegbami debunks Newspaper headline interview
Next ASUU Urges Nigerians To ‘Call FG To Order’ To Avoid Another Prolonged Strike