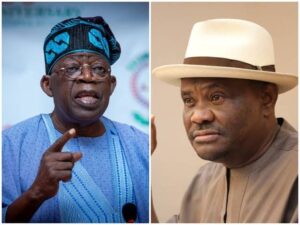 The Special Assistant to Governor Babajide Sanwo-Olu on Sewage and Drainage, Joe Igbokwe, on Thursday hinted that the Governor of Rivers State, Nyesom Wike met with the presidential candidate of the All Progressives Congress, Bola Tinubu.

The APC chieftain in Lagos State in a post on his Facebook account said the presidential aspirant under the Peoples Democratic Party met with Tinubu while some people are abusing themselves on social media.

YOU MAY ALSO LIKE:   Atorise Gets Lexus 2020 SUV Gift On Birthday

Naija News had earlier reported that the former Governor of Lagos State travelled to France.

A statement released by his media office revealed that Tinubu would hold some important political meetings while in Paris.

Governor Wike on Tuesday also stated that he is currently on vacation in Turkey.

Wike has remained silent over the runnings of the PDP after losing the vice-presidential ticket of the main opposition party to Governor Ifeanyi Okowa of Delta State.

Igbokwe who hinted at a possible meeting further stated that people have transferred their aggression to Tinubu.

The APC chieftain in a post on his Facebook account wrote, “while they are on Social Media abusing everybody Gov Wike goes to France to meet Asiwaju. Abuse, calling names, hate and bigotry are no strategies. They hated and abused PMB since 2015 and now they have transferred the aggression to Asiwaju. We wait and see.”