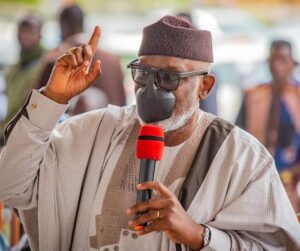 The Ondo State Government delegation has met the Hausa Community in Ikaram Akoko in Akoko North West Local Government area of the state in order to douse the tension, following the killings of some Ondo State residents in Jos, Plateau State.

The residents, who were mostly Hausa/Fulani and few Yoruba who drove the five vehicles, were returning home after attending the annual ZIKR (Prayer Session) in Bauchi, to mark the commencement of the New Islamic year.

They were attacked by Irigwe militia along Rukuba road, Jos North local government area of the state on Saturday.

The Deputy Governor, Lucky Aiyedatiwa, who represented the governor on the delegation commiserated with the families of the deceased.
He said, “On this sad development, we are here to commensurate with you on the incidence of 14th August along Rukuba Road, Jos North LG.

“You are one of us… majority of you are born here, so you are not strangers in Ondo State. You stay, you live, you work here, and therefore, you are one of us.”

While condemning the incident, Aiyedatiwa appealed for calm as he assured victims and relatives of the attack that the Police are working round the clock with other security agencies to ensure that all perpetrators of the evil deeds are arrested and prosecuted.

“We call on you all to remain calm… religious and traditional leaders must impress on our people to exercise restraint and not take the laws into their own hands.

“Really, this is a sad development as we feel your pains and your sorrow. This is a complete mistake of identity, when our people passed through a wrong place at the wrong time.

“Our governor has been discussing with Plateau State Governor, and a number of arrests have been made as our State is ready to pursue the matter to logical conclusion. All the culprits will never go unpunished.”

While appealing for peace, the deputy governor appealed against retaliation.

At the event, the Akala of Ikaram, Oba (Commodore) Olamoyi Momodu (Retd), thanked the delegation for identifying with the community at the darkest hour.

Equally, the Seriki of Hausa Community in Akoko Land, Alhaji Muhammed Haladu, expressed their profound gratitude to the deputy governor and his team for visiting them.