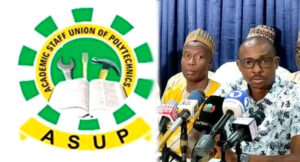 Lecturers in public polytechnics across the country will resume on May 30, 2022, following a directive from the Academic Staff Union of Polytechnics (ASUP).

The union had, on May 16, 2022, commenced a two-week warning strike over the failure of the government to meet some lingering demands.

Some of the demands which the union listed had included the payment of N15 billion revitalisation fund for polytechnics; payment of minimum wage arrears; review of conditions of service, among others.

According to The PUNCH the Federal Government commenced the payment of the minimum wage arrears, not just for lecturers of polytechnics, but also for university lecturers and other tertiary institution workers in the country.

YOU MAY ALSO LIKE:   See What Happened To Buhari’s Minister Who Slumped At Bauchi Event

While the union had said the payment of the minimum wage arrears was not a part of its demands, ASUP had said otherwise.

“The two weeks definite strike of the union will be rounding off on the 29th of May, 2022, as agreed by the emergency meeting of the NEC. Consequently, the union is requesting members to resume duties effective 30th of May, 2022, while hoping that government will take advantage of the window to address the five outstanding items.

“Further directives/ updates shall be released after the 103rd meeting of NEC which is scheduled to hold in the month of June, 2022, during which the situation shall be reviewed,” ASUP stated in the statement signed by its national publicity secretary, Abdullahi Yalwa.

YOU MAY ALSO LIKE:   Fulani Kidnappers Kill Driver, Abduct 5 Others On Lagos-Ibadan Expressway

According to ASUP, the government is yet to meet the following demands proposed by the union:

“Release of the approved N15 billion revitalisation fund for the sector. This issue is still stuck in the Federal Ministry of Finance with a promise of follow up action by the Education ministry.

“Release of arrears of CONTISS 15 migration for the lower cadre. This issue is still at the committee level set up to resolve the dispute on the contested 2014/15 verification report.

YOU MAY ALSO LIKE:   FINTECH 5.0: EVALUATING HOW FIRSTBANK STRENGTHENS COLLABORATION

“Release of the Scheme of Service and Conditions of Service: The document is still awaiting approval as it has been recalled from the Head of Service for further review.

“Continued delay in the appointment of substantive Rectors for Federal Polytechnics in Mubi, Offa, and Kaduna.

“Resolution of issues with members in Colleges of Agriculture: The issue is still pending as a resolution will require an interface between the Education ministry and Agriculture ministry.”