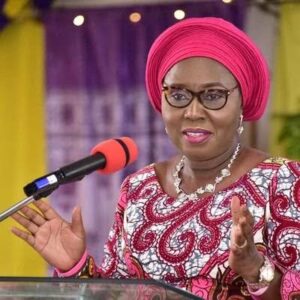 This is coming after Mrs Ebelechukwu Obiano, wife of the immediate past governor of Anambra, purchased nomination form for the senate.

Addressing journalists in Owerri, Imo State capital, on Friday, the Ondo First Lady said she has interest in representing Imo East Senatorial District because she wants to make a difference.

Mrs. Akeredolu, who spoke to members of the Correspondents’ Chapel of the Nigerian Union of Journalists (NUJ) in Owerri, said Owerri West senatorial zone has received the poorest representation in recent times.

She said that she would rely on her experience within and outside the country to bring to bear on the development of the zone.

She said that she’s been in constant touch with her people and if elected as a senator, she would strengthen that links.

She said that as a village girl who has taken a critical appraisal of their challenges, she would embark on human capital development, provision of basic necessities of life, stop the pollution of the Otamiri river and also ensure regular evacuation of refuse in all looks and crannies of the zone.

YOU MAY ALSO LIKE:   NIN: Network operators told to unbar phone lines immediately

“There is lack of compassion and understanding of how life can be made meaningful for our people in this century hence the need for a wake up call, Leadership should be not be gender based but neutral,” she said.

YOU MAY ALSO LIKE:   Another Tragedy In Ekiti As Soldier allegedly Stabs DSS operative to death inside hotel

On whether her marriage to a non-indigene of the state would impede her ambition, the Ondo First Lady argued that being a bonafide indigene of the state who has already endeared herself to the people and has touched many lives, she was emboldened to join the race to enhance their wellbeing.