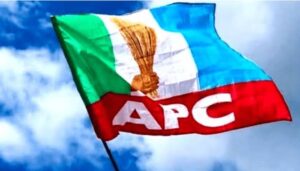 The Treasurer of the Lagos State chapter of the All Progressives Congress (APC), Sumbo Ajose, has died.

It was gathered that Ajose reportedly died in the United States of America on Tuesday, 13th July, 2021.

According to information, she had been battling for her life with an undisclosed illness for a while and was on a sickbed receiving treatment when she died.

Confirming her death, the Party’s Publicity Secretary, Seye Oladejo, described it as “sad and unfortunate.”

Meanwhile, a member of the House of Representatives from Zamfara State, Kabiru Amadu, has formally dumped the Peoples Democratic Party (PDP).

Society gazette reports that the lawmaker formally announced his defection to the APC on Wednesday.

Speaker of the House, Femi Gbajabiamila, read the letter of defection from Amadu at the plenary.

Amadu is the last of the six members from Zamfara who had earlier declared their defection at the state level along with Governor Bello Matawalle.

YOU MAY ALSO LIKE:   Just In: Bandits Kill APC Women Leader in Kwara

The lawmaker from Zamfara blamed the crisis in the PDP for their defection to the APC.

The legislators cited the crisis in the Zamafara State chapter of the PDP which led to the dissolution of the state chapter by the national leadership of the party as their reason for defecting to the APC.