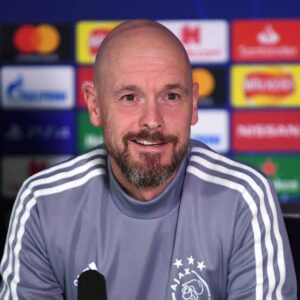 Dutchman will replaces Ralf Rangnick as the manager.

Official statement by Manchester United and Ajax confirms the agreement had been sealed.

Based on the deal, Hag will stay at Oldtrafford until June 2025 and an option to extend till June 2026.
United said the 52-year-old Dutch will become the manager at the end of the 2021/22 season.

United said, “The evolution in Ten Hag’s reputation has been meticulous, mirroring a rise which has been methodical rather than meteoric. A sharp, ball-playing central defender in his playing days, Erik spent the majority of his career spread across three stints with FC Twente, with whom he won the KNVB Cup in 2001.

“After hanging up his boots, a steady ascent up the coaching ladder began, inevitably within the familiar ranks at Twente. When former Reds no.2 Steve McClaren was made manager in 2008, Erik stepped up to become assistant manager and made an immediate impression.”