JUST IN: Nigeria’s Blessing Okagbare Banned For 10 Years Over Doping 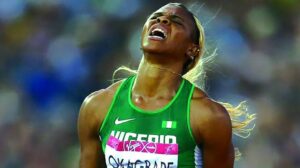 “The Disciplinary Tribunal has banned Nigerian sprinter Blessing Okagbare for a total of 10 years,” read an AIU statement.

The 33-year-old sprinter won silver in the long jump at Beijing 2008.

The Nigerian competed in the 100m heats in Tokyo on July 31 2021 but was suspended prior to the semi-final.

The AIU had said that Okagbere tested positive for presence and use of a prohibited substance due to human growth hormone at an out-of-competition test in Slovakia on July 19.

“The AIU requested EPO analysis be conducted on the sample on July 29 and the adverse analytical finding was reported to it on Aug. 12,” the AIU said on August 20.

YOU MAY ALSO LIKE:   Abba Kyari Spends Night In NDLEA Custody As Top Police Officers May Be Indicted
JUST IN: Nigeria’s Blessing Okagbare Banned For 10 Years Over Doping 2022-02-18
Oluwasegun Adesuyi
Share

Previous JUST IN: Kingsley Moghalu Officially Declares To Run For 2023 Presidency
Next 2023: Why Nigeria Must Avoid Fire Brigade Approach To Election – Obasa