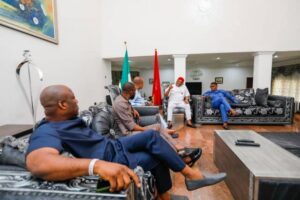 The Chief Whip of the Senate and former Governor of Abia State, Senator Orji Uzor Kalu, on Thursday afternoon received the newly-elected officials of the Peoples Democratic Party (PDP) in his Abuja residence.

The team was led by the National Secretary of the PDP, Senator Samuel Anyanwu.

Anyanwu, a former Senator, arrived at the residence of Kalu around 12.28pm.

Anyanwu was welcomed by Kalu’s associates and then led straight to a room for a closed-door meeting.

As the meeting between Anyanwu and Kalu progressed, other executives of the PDP arrived in turns at Kalu’s residence to join.

The visit comes amidst rife rumours that Kalu is being positioned for the 2023 presidency.

YOU MAY ALSO LIKE:   Unknown Fighter Helicopter Shoots Passenger Boat In Rivers

Kalu, a founding member of the PDP, formally joined the ruling All Progressives Congress (APC) in 2016.

On Wednesday, he had met Senator Anyim Pius Anyim, a one-time Secretary to the Government of Federation (SGF).

Kalu via his verified Facebook page had said: “I played host this evening to my brother, former Senate President and former Secretary to Government of the Federation, Senator Anyim Pius Anyim.

“We held a deep discussion about our region and our country, Nigeria at large.”