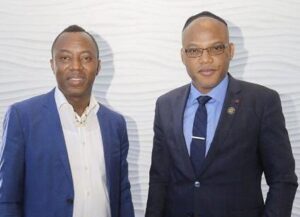 It will be recalled that the Department of State Services (DSS) failed to produce the Biafra separatist leader in court last time out, and many supporters of the 54-year-old are calling on the government to ensure Kanu appears in court today — for them to be sure he is alive.

YOU MAY ALSO LIKE:   BREAKING: Malami denies Memo Seeking Suspension Of Constitution, Says it is fabricated

Kanu’s organization, the banned Indigenous People of Biafra (IPOB) is a controversial group canvassing for the sovereignty of Eastern Nigeria, and Kanu has always run into trouble with Nigerian authorities.

“#FreeNnamdiKanu today asking for self-determination is not a crime! In particular, the Federal Govt must produce him in court early this morning #RevolutionNow,” Sowore wrote on his official Facebook page on Thursday morning.

Recall this newspaper reported earlier that the Federal Government slammed an amended seven-count charge against Kanu, while the Federal High Court issued a hearing notice for Thursday.

The notice titled “Federal Republic of Nigeria Versus Nnamdi Kanu” with suit number: FHC/ABJ/CR/383/15, was served on Barrister Ifeanyi Ejiofor and the prosecuting lawyer, Shuaibu Labaran.

Kanu is being tried on charges of treasonable felony.