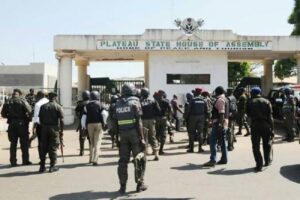 Mr. Ponven Wuyep, the House clerk, told Blueprint via phone interview that the combined security force had been deployed.

“The OC police at the house woke me up early in the morning, telling me that the police headquarters in Jos had ordered him to seek reinforcement, but he later told me that a major joint security taskforce had been deployed to the House even before he did that.

“I’m on my way to the office to take a look around.”

According to Blueprint, mixed emotions have accompanied the House’s declaration that the people should “practically stand up to defend themselves.”

YOU MAY ALSO LIKE:   Fidelity Bank Plc Announces a 53.9% Growth in Profit Before Tax to N10.1bn For the 3 Months Ended 31 March 2021
Just In: Tension As Security Operatives Seals Plateau House Of Assembly Complex 2021-08-30
Oluwasegun Adesuyi
Share