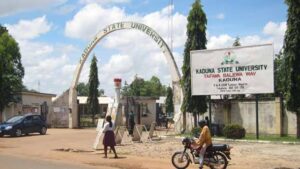 The management of Kaduna State University (KASU) has resumed academic activities as it commenced second-semester exams for students.

Naija News understands that the institution had suspended its activities after the Academic Staff Union of Universities (ASUU) embarked on strike action.

However, after five months of inactivity as ASUU and the federal government could not reach a good end, the school management asked students to resume for the 2020/2021 academic session.

Naija News learnt that the resumption is for the continuation of the second-semester examination for both undergraduate and postgraduate students.

Confirming the development while speaking to Channels Television, the acting Vice Chancellor of Kaduna State University, Prof. Abdullahi Ashafa said the school does not have any industrial dispute with the local branch of ASUU, hence there is no need to continue keeping the student at home.

The varsity Don warned that there will be severe consequences for students and lecturers who fail to resume classes as directed by the university management.

ASUU Extends Strike By Another Four Weeks
The strike embarked upon by ASUU has been extended by another four weeks.

The development was confirmed on Monday in a statement by the ASUU President, Professor Emmanuel Osodeke on behalf of the union.

YOU MAY ALSO LIKE:   There Will Be No Election In Yorubaland In 2023, Says Igboho

Naija News reports the decision to extend the strike was reached at the end of the union’s National Executive Council meeting held at its national secretariat in Abuja on Sunday and concluded in the early hours of Monday.

ASUU explained that the time extension is to allow the federal government enough time to meet their demands.

YOU MAY ALSO LIKE:   Breaking: ASUU Extends Strike By Another Four Weeks

The statement signed by Osodeke reads in part: “following extensive deliberations and taking cognisance of Government’s past failures to abide by its own timelines in addressing issues raised in the 2020 FGN/ASUU Memorandum of Action (MOA), NEC resolved that the strike be rolled over for four weeks to give Government more time to satisfactorily resolve all the outstanding issues.

YOU MAY ALSO LIKE:   Tony Elumelu Presents Transcorp Group’s Strong 2021 Performance and ESG Blueprint to Shareholders