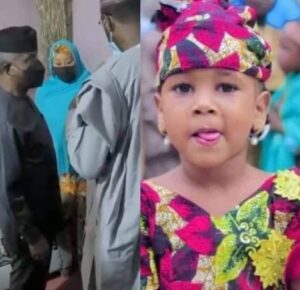 The Vice President of Nigeria, Yemi Osinbajo on Tuesday visited the family of the five-year-old Hanifa Abubakar who was abducted and murdered by Tanko Abdulmalik.
Osinbajo visited the family in Kano State to commiserate with them over the murder of their child.

YOU MAY ALSO LIKE:   Abba Kyari Spends Night In NDLEA Custody As Top Police Officers May Be Indicted

Tanko after being suspected to have abducted the little girl killed her five days after collecting part payment of the ₦6million ransom he demanded.

The suspect who has since been arrested and standing trial disclosed that he poisoned Hanifa with rat poison to evade being discovered and buried her within the school compound.

The development which has stirred reactions across the country saw the First Lady of Nigeria, Aisha Buhari call for capital punishment for Hanifa’s killer.

Watch the video of Osinbajo’s visit below: