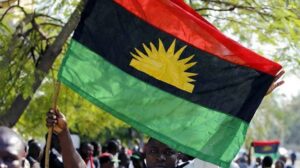 The Indigenous People of Biafra (IPOB) has declared that the arrest of its leader, Nnamdi Kanu can’t stop the agitation of the group for a sovereign Biafra.
IPOB spokesperson, Emma Powerful declared on Wednesday that though Kanu has been arrested by the federal government, it is not the road for them and their agitation.

He added that they would mobilize their members and storm the courts for Kanu’s trial which resumes on July 26.

YOU MAY ALSO LIKE:   74th UNGA: Nigeria’s Muhammad-Bande takes over as president

“IPOB will not relent in the pursuit of Biafra freedom. We have crossed the Rubicon in our struggle for the restoration of Biafran Sovereignty. There is no going back no matter the level of intimidation by our oppressors,” he declared.